How Much Oil Do I Burn In A Day?

If your home uses oil for heating, it is important to make sure there is always an adequate amount of fuel in the tank to keep your home warm and comfortable throughout the colder months of the year. Figuring out how to calculate fuel oil consumption can help you make sure there is enough fuel in your tank all winter long and can help you determine how much oil heat you use in a month. Knowing your average fuel use can also help you find ways to cut back, extending the life of your fuel supply and helping to reduce your home heating costs.

How Much Heating Oil Does the Average House Use in a Day?

Typically, the warmer it is outside, the less oil your heating system will need to use to bring your home up to a comfortable temperature. When it’s 50 degrees or so outside, you might use just a couple of gallons of oil in a day. Should the temperature drop to 20 degrees, you might use seven or eight gallons of oil daily. Your furnace or heating system will need to work harder to keep the temperature in your home comfortable when it’s colder outside, leading to an increase in the amount of heating oil you use.

The energy efficiency of your heating system also has an effect on the amount of heating oil you use daily. The more energy-efficient your heating system is, the less oil you will go through each day, even on colder days. The efficiency of a heating system, such as a furnace or boiler, is measured using the annual fuel utilization efficiency (AFUE). The AFUE compares the amount of heat produced by the furnace or boiler compared to the amount of fuel it uses. When a system has a higher AFUE rating, it means it is more efficient. For example, a furnace with an AFUE rating of 88% uses 88% of fuel to produce heat. The remaining 12% of the fuel is “lost,” either by traveling up the chimney or otherwise escaping. Typically, a very efficient heating system will have an AFUE rating above 90%. The least efficient models tend to have AFUE ratings below 80%.

Since an efficient heating system isn’t “losing” as much heat as a less efficient system would be, it’s going to use fewer gallons of oil on a daily basis. In addition to the AFUE rating, some other factors affect the energy efficiency of a heating system and the amount of oil it uses daily. For example, older heating systems typically feature a continuously-burning pilot light, which uses more energy compared to the electronic ignition found in newer, more efficient systems.

The size of your home, the number of people who live in it and their lifestyle preferences will also influence the amount of oil you use each day. Typically, homes with a larger footprint will need to use more fuel than smaller homes. When there are more people in a home, the daily fuel use is also typically higher compared to a household with just one or two people. If the people who live at home prefer to keep the temperature up, at 70 degrees or so, the house will need to use more fuel.

What Is the Average Heating Oil Usage per Square Foot?

You can calculate the average amount of heating oil used per square foot by dividing the total amount of oil used by the size of a home. For example, the median size of a new, single-family home built in 2018 was 2,386 square feet. If that home used 500 gallons of oil over the course of fall and winter, it used about 1/5-gallon (0.21 gallons) per square foot.

The exact amount of oil used per square foot will vary based on temperature and the energy efficiency of the heating system, as well as factors such as the preferences of the people in the house, the home’s layout and the overall efficiency of the property. You’ll use more oil per square foot, for example, if you want to keep your house at 70 degrees compared to someone who wants to keep the temperature in their house at 65 degrees.

How Long Should a Tank of Heating Oil Last?

Knowing about how much fuel you use each day will help you figure out how long the oil in your tank will last. The size of your tank, weather conditions and personal preferences also affect how long a tank of heating oil will last. You can plug those numbers into a heating oil consumption calculator to get an estimate, or you can crunch the numbers yourself. For instance, if you have a 275-gallon oil tank, and you use about 2.75 gallons of oil each day, the fuel in the tank will last you about 100 days.

It is worth noting that a tank of oil might last for a different duration at the start of the cold season compared to at the end. If the temperatures in October and November are considerably warmer than they are in January and February, you are likely to find that it takes you longer to use the fuel in your tank during the late fall compared to in throes of winter. It is a good idea to monitor your oil tank or to sign up for automatic delivery so that you do not miscalculate how long the fuel will last and end up running out.

How to Calculate Your Fuel Oil Consumption

In Maryland, the average temperature during the winter months is 34 degrees.

If the average temperature is 34 degrees over the course of a 24-hour period, the number of heating degree days is 31:

If the temperature averages 34 degrees three days (24 hours) in a row, the number of heating degree days for that three-day period is 93:

Usually, the fewer heating degree days there are over the course of a season, the less oil you need to use. During the 2015-2016 winter season, the number of degree days was 18% lower than the previous winter. During that season, demand for heating oil also fell by 18%, presumably because the warmer temperatures meant that people did not need to heat their homes as much.

At the start of the heating season (October 1), your 275-gallon tank had 75 gallons in it. You receive delivery of 200 gallons, bringing the total up to 275. On February 1, your tank is once again at the 75-gallon mark, and you receive another 200-gallon delivery. The weather was somewhat warmer than usual, so between October 1 and February 1, there were about 1,600 heating degree days. To find the K-factor, you would divide the number of heating degree days (1,600) by the number of gallons in the delivery (200), to get a K-factor of 8:

Using the K-factor, you can determine that you’ll need a new fuel delivery of 200 gallons every 1,600 heating degree days.

The K-factor is helpful because it takes into account temperature differences when calculating fuel use. If Southern Maryland experiences a colder-than-usual early fall, there might be 1,600 heating degree days between October 1 and December 15, meaning you’ll need to schedule a fuel delivery of 200 gallons earlier than if the temperatures are above average. If the fall and winter are considerably warmer than average, that same 200 gallons of oil might last you from October 1 until March 1.

When you sign up for automatic delivery with SMO Energy, we take care of this math for you. We use a combination of factors, including degree days and your K-factor, to determine when you’ll need another delivery. We then schedule your delivery before you run out of fuel so you don’t have to worry about monitoring your fuel usage or scheduling deliveries.

How to Use Oil Heating Efficiently

While you have no control over outside temperature or the weather, there are factors you can control that affect how much oil you burn in a day. Finding ways to use oil heating more efficiently can help to lower your fuel use and save you money. Here are a few things you can do.

1. Turn Down the Heat 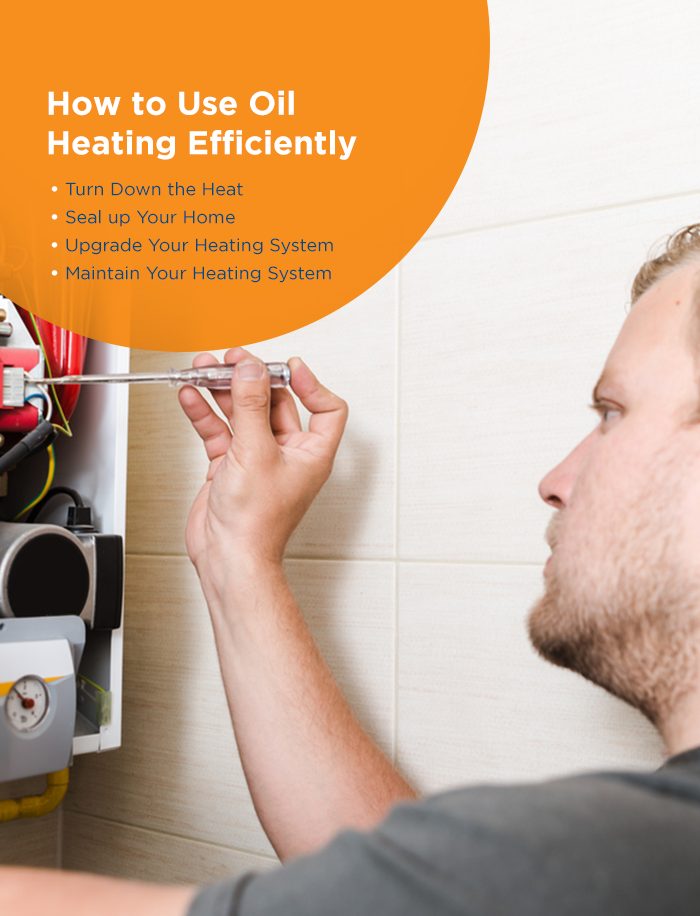 2. Seal up Your Home

If your home is drafty or does not have insulation, heat will leave it quickly. You end up using more fuel to keep a drafty, poorly insulated home warm. A home energy audit can help you find where heat is escaping from your house and also recommend ways to seal it up.

Caulking around outlets and light switches might help to keep the heat in. Hanging heavy drapes or shades from the windows can provide an extra layer of insulation while making sure your windows are shut tightly and locked will also help to keep the warm air in.

If you have adult or teenage children who are the same age as your heating system, it might be time to upgrade your furnace or boiler. Newer heating systems are designed to be much more energy-efficient compared to older models. Not only do newer models have higher AFUE ratings, but they also have features designed to help improve their efficiency or to help them make the most of the fuel they use.

You do not have to try to figure out which type of heating system upgrade is right for your home on your own. During a home energy consultation, a trained technician from SMO Energy will measure and evaluate your home before recommending a system that seems like a good fit. Our technicians can also take a look at your home’s ducts and determine if heat is escaping through them. It might be the case that sealing or insulating the ducts will be enough to help improve your system’s energy efficiency and reduce the amount of heating oil your household uses.

Well before it is due for replacement, your heating system needs attention and care to help it function at its best and to help it run efficiently. Regular inspections and tune-ups of your furnace or boiler will improve its functionality so that it does not burn more fuel than necessary. During a tune-up, a technician will thoroughly test and inspect the heating system to verify that all components are working as they should be. The tune-up also typically includes a cleaning of the system and replacement of the air filters.

Manage Your Energy Costs by Knowing How Much Oil You Use

Figuring out how much oil your home uses each day, month or during the season can help you better control your costs. Once you’ve calculated your typical oil use, you can start to think of ways to reduce it, so that you pay less for fuel overall. Knowing how long a tank of heating oil will last is also essential if you want to avoid running out of fuel. When you have an understanding of how your habits and the outside temperature affect your fuel use, you can better plan your deliveries.

Even if you decide to sign up for automatic delivery, it’s still worthwhile to calculate fuel oil consumption. If you know how much you use, you get a sense of what your oil bill will be like for the year, which can help you budget more effectively.

Whether you decide to have scheduled oil deliveries, automatic delivery or will-call delivery, SMO Energy is here for you. Contact us today to learn more about our residential heating oil prices, our service agreements and our delivery options.